Grand Canyon plants sport a plethora of endemic species due to geography and unique environmental conditions. Endemic plants are plants only found in that region and nowhere else. These rare gems are as beautiful as they are interesting. Here is a quick list of some of the Grand Canyons endemic plant species.

The Grand Canyon has its very own agave species- Agave phillipsiana. This agave stands about three feet in height and has a characteristic blue and silver hue to its needle leaves. It’s typically found to grow on high places near rivers, but groupings of this plant have been found around old native inhabitant locations where it was probably farmed. It’s extremely rare and is classified as critically imperiled in its conservation status, putting it at high risk for extinction. But, because it survives in hard terrain, it’s likely to survive human decimation.

One very rare and unknown penstemon graces the Grand Canyon. Penstemon palmeri var. eglandulosus. A naturally occurring variety of P. palmeri, this naturally occurring penstemon is locally known as “scented beardtounge” and with good reason. It’s reported that this penstemon sports a lovely scent. Varying slightly from the common garden variety, this penstemon is still as unique as it is beautiful, only found in the Grand Canyon region. 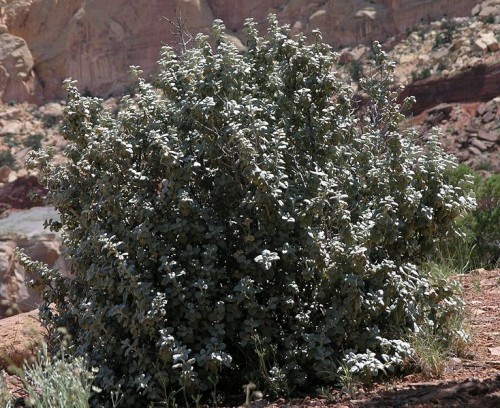 A Grand Canyon plant not to mess with: Roundleaf Buffaloberry (Shepherdia rotundifolium) is an interesting shrub indigenous to the Grand Canyon region. A small shrub with thick, small, blue/purple fleshy leaves and tiny yellow flowers, this shrub is said to have a powder underneath the leaves that can cause blindness.

One gem of a rarity, the Tusayan Fameflower or Phemeranthus validulus, is a small, unassuming Grand Canyon plant which has succulent-like leaves and a small pink five petal bloom. In the fall, the foliage turns a bright red. It’s reported that this tiny plant (usually tops out at around 3 inches high) has stopped construction progress in the area, in an effort to safely remove it and transplant it before it became destroyed.

The common North American native- the common milkvetch- has a very rare and very related cousin living only in the Grand Canyon. Astragalus cremnophylax var. cremnophylax or the Sentry Milkvetch is a heavily federally protected species of plant. Very small, this spreading wonder of a plant stays close to the ground with its dark green foliage and tiny purple sweetpea-like flowers. In the same family as beans and peas, this legume survives in hot, rocky areas of the Grand Canyon region.

There are many more rare and interesting plants that live only in the unique climate areas of the Grand Canyon, many of which are beautiful and unassuming. Most are very protected by the states they are rooted in, by the park itself, and by the federal government. As symbols of the rare beauty that the Grand Canyon offers, they’re unlike anything in the world and deserve protection and consideration. Heavy efforts are being made to preserve these species and many others. If you visit the Grand Canyon, take some time to ask about these plants and the many other endemic Grand Canyon plant species. They’re amazingly beautiful.