The Condors of the Grand Canyon

Grand Canyon News – The Condor Re-Introduction and Recovery Program a Success, According to Wildlife Experts 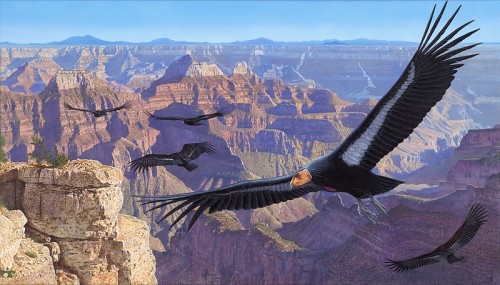 In recent Grand Canyon news, wildlife experts are deeming the Condor Re-Introduction and Recovery Program a success. The California condor is considered to be one of the rarest birds, worldwide. Once a very common bird species, during the 1930s, it was discovered that no condors resided outside of the State of California. Based on numerous studies, by the year of 1982, it was established that the remaining population of condors consisted of just 22 birds. As a result of this fact, the extinction of the species loomed. Today, the Grand Canyon is considered to be an essential refuge location for the California condor and one of the best viewing locations in the nation to observe this once troubled species. In this guide, you will learn about the condors, based on the Grand Canyon news reports, and the progression of the species.

When browsing through the Grand Canyon news pages, you will discover a lot of different information regarding the California condor. The attempt to save this species from becoming extinct is considered to be one of the longest recovery efforts regarding wildlife, throughout history. In the year 1967, this bird was placed on the list by the federal government of endangered species. It was then that scientists and other researchers initiated the process of studying the condor’s preferred habitat and the mortality factors associated with the species. According to Grand Canyon facts, it was in the year of 1983 that the organization known as the, “U.S Fish and Wildlife Service”, started a captive-based breeding program for the condors. In this effort, the organization teamed up with the Wild Animal Park in San Diego and the Zoo in Los Angeles to ensure the highest level of success.

Based on Grand Canyon facts, the decision to locate and obtain all of the remaining condors in the wild into captivity was a highly controversial one. Despite the controversy, on April 19th in the year of 1987, the very last wild condor was officially captured, placing hope for the recovery of the species completely on the captive breeding initiative. According to Grand Canyon news stories, this initiative was highly successful.

Based on Grand Canyon news coverage and facts pertaining to the condor, one of the main reasons that the species faced extinction is because of the fact that the animals are not capable of engaging in the act of reproduction until approximately six years of age. Additionally, once a condor pairs with another condor of the opposite sex, they typically remain a “couple” throughout their lifetime and produce only one egg every one to two years. As a result of these characteristics, population recruitment is exceptionally low. In order to offset this issue, a breeding technique was created where when a condor lays an egg, it is immediately removed. As a result, the parent condors then lay another egg. In many instances, this resulted in one pair of condors laying up to three eggs close together. As a result of this technique and specialized raising techniques by caretakers, the population of condors increased from 27 in the year of 1987 to 177 in a very short time frame.

After years of research, work, and dedication, it has been established that there are approximately 400 California condors. More than 200 of these birds are now located in the wild and the efforts to increase the population of the birds continues. The species is still considered to be endangered, immense progress is being made. Based on Grand Canyon news, condors can now be seen flying in and around the national park. Many have homes and take refuge in the caves and other natural structures of the park. Condors are observed most frequently in the summer months. By simply observing the various caves and other areas within the Grand Canyon, you are sure to catch a glimpse of the remarkable condor. Based on Grand Canyon facts, this national park is a critical point and habitat for many of the most majestic and endangered bird species in the world. By visiting today, perhaps you will catch a fleeting glimpse of one of these amazing birds! For best times to observe rare and endangered birds, research Grand Canyon news stories and reports before visiting the national park.