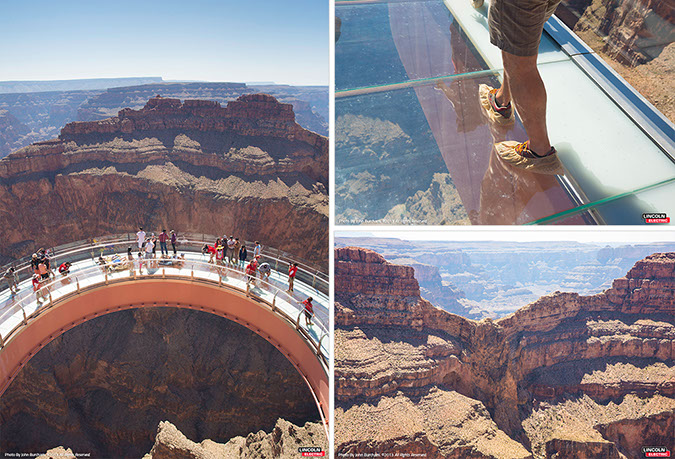 The Grand Canyon Skywalk is an immense structure that is suspended 4,000 feet over the base of the canyon. The companies, Lochsa Engineering and MRL Associates out of Las Vegas developed a partnership with contractors from the same area to construct this amazing structure for visitors to the Grand Canyon in a safe and secure way, careful to avoid negatively impacting the breathtaking beauty associated with the region. The Skywalk is the first of its type, designed to deliver visitors with the ultimate Grand Canyon View. Completed on the 28th day of March in the year 2007, this structure is located on the West Rim, which is located in the State of Arizona. It is only a two hour drive from Las Vegas and a five hour drive away from Phoenix, Arizona.

As mentioned previously, the Grand Canyon Skywalk is 4,000 feet above the base of the canyon, or above the Colorado River. According to statistics and measurements, it is more than twice as high as the Sears Tower, which measures in at 1,729 feet. It is also larger than the John Hancock Building which measures in at 1,506 feet, the Empire State Building, which is 1,454 feet high, and the Gateway Arch, which measures in at 630 feet high. It took a total of four months to complete the welding for the structure and was assembled onsite. The foundation of the Grand Canyon Skywalk has the capability of supporting 71 million pounds. This is equivalent to the weight of 71 747 planes that are fully loaded.

Check out all Grand Canyon Skywalk Tours and see what’s on sale now!