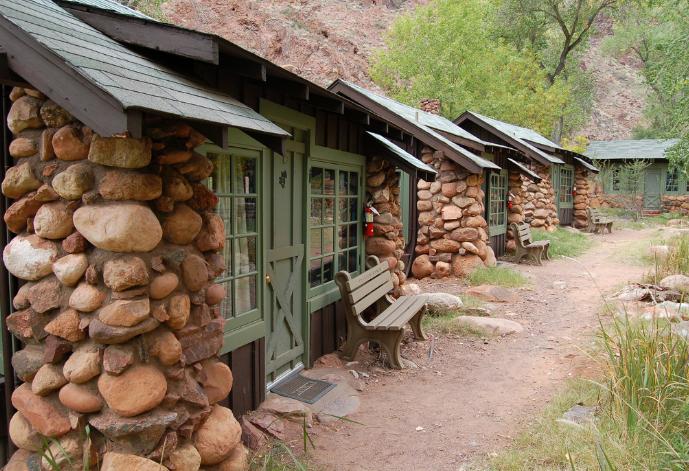 If you are planning a trip to the Grand Canyon, you should step off the beaten path and visit Phantom Ranch. This lodge is situated on the north side of the ever-popular Colorado River. It is close to the Phantom Creek and the Bright Angel Creek. Constructed in the year of 1922, it is part of the Historic Hotels of America.

The region where the ranch is located was used by many Native Americans throughout history. Artifacts from as far back as 1050 have been discovered in the area. The earliest visit documented was in the year of 1869 when John Wesley Powell and members of his company elected to camp at the beach. Despite being a lodge, there are several historical destinations in the area that you are sure to enjoy. In this brief guide, we will highlight three of those popular points of interest.

1. Rust’s Camp
David Rust was a historical figure that had the goal of capitalizing on the increased tourism in and around the South Rim that started to occur just a few short years after the introduction of the Santa Fe Railroad. He and his crew elected to construct a camp at the very bottom of the Grand Canyon.

The camp offered relatively modest accommodations to individuals of the time – prospectors, tourists, and hunters. Today, you may explore the trail of Rust’s Camp and observe what is left. While that is very little, it is a location of immense historical significance!

2. The Orchard
Situated just past the ranger station between the mule corrals and the expanse of the Grand Canyon floor is the area where Rust and the popular Fred Harvey Company grew an orchard, as well as an alfalfa field designed to provide nutrition to the livestock.

This is the area where Rust elected to cultivate special crops, too! It was his goal to ensure that the area was self-sustaining. Now, you can see this area for yourself!

3. Black Bridge
When visiting Phantom Ranch, be sure to check out Boat Beach. From here, you can actually see Black Bridge. When the Grand Canyon was officially noted as a national park in the year of 1919, a wooden suspension-based bridge was placed to replace the tramway that David Rust built. Unfortunately, by 1928, the bridge was deemed to be faulty. This is when the Black Bridge was built. Near to this bridge, recorder towers were placed that helped to determine the stages and other information about the Colorado River. Today, the USGS still uses this area to collect important data.

Phantom Ranch is an area deep-rooted in history. There are several significant historical events that took place in and around this area. Trail crews, rangers, and a multitude of scientists have visited this location. Now, you can, too! Many notable people have frequented the area. David Rust, Mary Colter, and even Teddy Roosevelt! Phantom Ranch is an area of changes, many challenges, and a broad array of achievements!

For more information on unique ways to explore Phantom Ranch at the Grand Canyon, visit us today at: https://grandcanyonhelicoptertour.net/